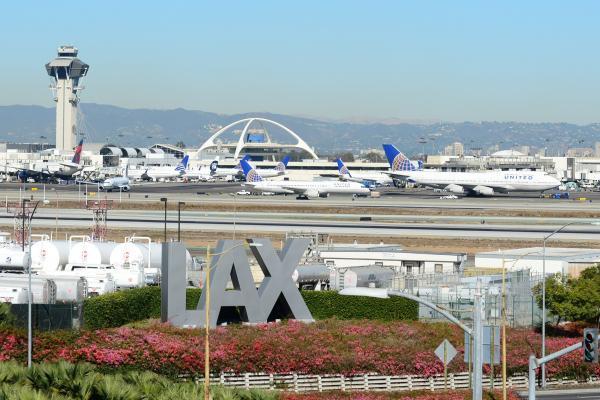 Los Angeles International Airport was built in 1929 and is now one of the most popular airports in the world and the main one in California, USA. And this is easily explained, because in the City of Angels (another name for Los Angeles) is Hollywood, which attracts many people from all over the world with a chance to fulfill their dreams. The city attracts people of different ages - this is the starting point for students arriving to study at the University of California, the fabulous city and Disneyland amusement park for children, the headquarters of international companies as the goal of business trips and the world-famous museums and theaters for fans of cultural education. Almost 80 million travelers receive the airport annually, ranking in the top ten airports in the world in terms of passenger traffic.

With the time of the first opening, the Los Angeles airport was not rebuilt, but only expanded in connection with the construction of new terminals. Now it consists of 9, the main of which is named after Tom Bradley - the only African-American mayor of the city. It is in this terminal that most flights of large companies from around the world, including Russian Aeroflot airplanes, arrive. You can use the free shuttle to get from one terminal to another.

Particular attention at the airport is given to people with disabilities - buses are equipped with lifts for strollers, everywhere in the territory there are elevators, special toilets, allocated parking lots and restaurants. Airport employees are always ready to provide additional assistance, including medical assistance. An additional telephone line for the hearing impaired is available around the clock. Wheelchairs are available upon prior request.

Despite the fact that the Los Angeles airport cannot be called innovative, on its territory there is everything necessary for a comfortable waiting for the flight, as well as for planning further trips, for example, with the help of representatives of rental companies. Almost all terminals except 1 and 8 have Duty Free shops, as well as souvenir stalls. Passengers are offered a wide selection of food outlets, depending on preferences and the desired price category. The entire airport has free high-speed Internet and electronic charging points.

A free shuttle bus runs regularly to the nearest metro station, which is preferred not only because of price, but also because of speed - public land transport has priority on the roads. A taxi ride can be a waybill, because it will take a lot of time - movement around the airport is difficult, the minimum price excluding traffic jams is $ 40. Most tourists who are already familiar with the city prefer to rent a car at the car rental at the airport, since the scale of the city does not allow you to move on foot, and a rented car opens up opportunities for traveling throughout the city and beyond without restrictions.

Bookingcar offers a wide variety of car rental options at Los Angeles Airport
With us you can choose a car of any class that best suits your needs.
Our prices are one of the best prices on the market.
See for yourself!
Professional support
Our professional call center will help you understand all the intricacies of car rental. We guarantee full support throughout the rental period.

Other locations in Los Angeles:

We had a car with a mileage limit. It seemed unimportant, but in the end we rolled out much more, next time we will select a car with unlimited mileage.

A huge flow of customers and service is a little lame

A good selection of a cabrio

He did not regret that he took the car from the distributor, although for some reason he had bypassed his proposal for some reason. I recommend picking up cars here.