Explore Amman in a hire car 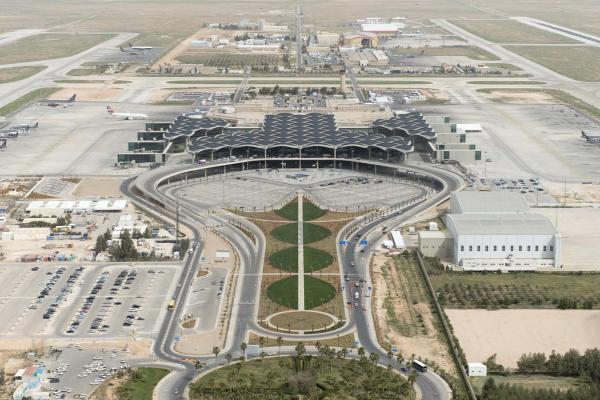 Amman International Airport is the largest in Jordan and is considered to be the "Gateway to the World" for the whole country. More than 5 million passengers use this air gate every year to see the ancient rocky city of Petra and other unique historical and religious monuments, relax on the beach and undergo treatment on the coast of the Red and Dead Seas. By renting a car using Bookingcar.su, you can easily organize an independent trip in a cool rental car to the main attractions of the city: the ruins of the Temple of Hercules and the Byzantine Church on the fortress of Jabal al-Qala, ancient burials in the Al-Kahaf cave, the ancient Roman an amphitheater for six thousand people and the Royal Museum of Machines.

The airport complex was built in 1983 and named after the dead Queen Aliya Al-Hussein, the third wife of the ruler of Jordan, Hussein ibn Talal, who devoted her life to the struggle to improve the living conditions of women, children and orphans. There is a free bus between the two passenger terminals. The airport terminal has a comfortable waiting area, a lounge for more demanding passengers, several Duty Free shops and souvenir shops, a cinema and a children's play area, cafes and restaurants where you can start exploring rich and delicious Arabic dishes. Wi-Fi is available at the airport.

Given the increasing popularity of the country for tourists from Russia, many employees of the air harbor speak Russian and can help you find the rental car rental desk indicated on your voucher. If you do not plan active trips to the region rich in cultural heritage, and you only want to get to the chosen resort or hotel, you can catch a bus that leaves every half an hour from the parking lot at the exit of the arrivals area. There, taxi cars are waiting for vacationers, the trip to the center of which costs about 20-25 dollars.

Bookingcar offers a wide range of car rental options at Queen Alia Amman Airport
With us you can choose a car of any class that best suits your needs.
Our prices are one of the best prices on the market.
See for yourself!
Professional support
Our professional call center will help you understand all the intricacies of car rental. We guarantee full support throughout the rental period.

Other locations in Amman:

The last time to rest without a car is not going. We book from different distributors. We noticed that here the best combination of price and quality of service. Perhaps, in our search we will stop at this company. Simply perfect!

The HYUNDAI ACCENT was booked, the specialist emphasized that this machine is suitable for our requirements and plus now for the promotion. We could not miss this opportunity. I liked that the car was clean and fully serviceable. My husband was worried that there would be no breakdowns on the way, fortunately everything turned out. In general, we hear that in case of breakdowns, managers provide all the necessary assistance, so there is nothing to worry about.

Booking the car decided to pick up immediately at the airport upon arrival. It would be better to be asked to deliver the car to the hotel. The queue at the counter was huge.