Explore Stockholm in a hire car 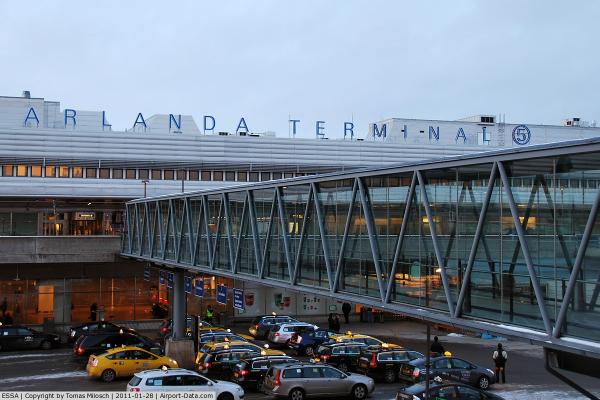 Stockholm International Airport annually receives more than 20 million passengers from around the world, being the largest airport terminal in Sweden and the third largest in Scandinavia. It is also called Arlanda, as well as the territory in which it is located. People come here for the grand concerts of world stars on the stage of the Globel Arena, for a walk in a bizarre city built on 14 islands, and an unforgettable Scandinavian flavor. Bookingcars.su service offers you to rent a car from the car rental leaders, so that you can immediately get to know the capital of Sweden from the airport.

The airport complex began its work in 1960 and by 1993 had grown to 5 terminals that successfully serve the growing passenger flow. While waiting for a flight, travelers can visit the exhibition center, order a European business lunch or try traditional Swedish cuisine in one of the 30 restaurants and cafes, buy souvenirs, chocolate, fish pastes and cold smoked venison, punch and herbal tinctures in numerous shops or in a shopping center Sky City Center, located between terminals 4 and 5. For the convenience of tourists, there are also bank branches, a pharmacy and a chapel at the airport. If you travel with young children, a mother and child room will come in handy, and business travelers will appreciate the conveniences of 50 meeting rooms.

If you need to quickly get to the city center, you can take the aeroexpress train, which leaves every half an hour and reaches the central station in just 20 minutes. However, if you are planning a trip to the region, it is more profitable and more convenient to rent a car. Having picked it up at the airport, you can immediately go sightseeing: the 14th century Wadsten Abbey, the majestic Royal Palace, the Skansen open-air museum of culture, which contains about 150 houses and estates from all over the country, and the Unibaken fairy tale museum, along which Carlson and Peppy Long Stocking.

Bookingcar offers a wide selection of car rental options at Stockholm Airport
With us you can choose a car of any class that best suits your needs.
Our prices are one of the best prices on the market.
See for yourself!
Professional support
Our professional call center will help you understand all the intricacies of car rental. We guarantee full support throughout the rental period.

Other locations in Stockholm:

I am very pleased that I finally made the reservation on this site. The consultant extremely politely informed all conditions, helped to make the order. The car was given at the appointed time, as I asked. The return was delayed a bit, but, as I understand it, this is the situation in all rental companies

I booked HYUNDAI I40 for 5 days. On vacation there was little time, I wanted to have a rest and to go to all places of my excursion program. On business trips I usually take cars here, for holidays too I decided to try something to pick up. Machines were offered a lot, well, that it turned out quickly to contact a specialist who consulted on the machines. On the whole, in principle, happy, not counting the delay with the documents.

When booking, I did not pay attention to the insurance. I use the services of the distributor for a long time and somehow I'm already doing everything on the machine. I got into an accident, but my fault was not. While trying to contact the representatives of the company with horror tried to remember what there is generally in the contract spelled out. In the end, I was told that the insurance covers all costs, and do not worry so much. On my experience I was convinced of honesty and decency of the distributor. In addition to good service and a wide choice of cars, I know of one more advantage.

Apart from multiple scratches on the car, all the norms