Explore Bologna in a hire car 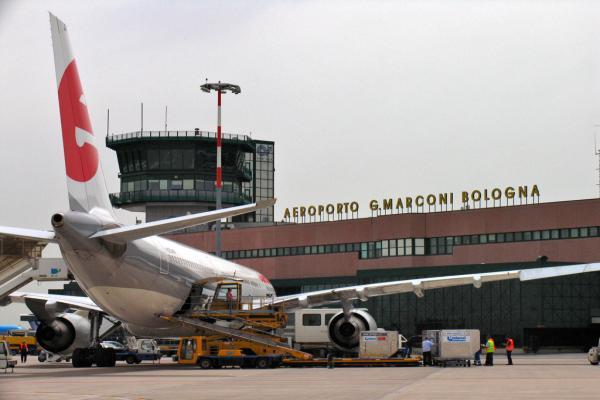 The international airport of Bologna is the main airport in the Emilia-Romagna region and ranks seventh in Italy in terms of passenger traffic. He bears the name of the Italian physicist and Nobel laureate Guglielmo Marconi. Taking advantage of the fact that these air gates are located just 200 km from the major center of finance and fashion - Milan, almost 7 million annually choose this airport terminal for a budget arrival in Italy. And 6 kilometers is the ancient city of Bologna, where in the XI century the first university in Europe was opened.

The airport of Bologna consists of one terminal, which was modernized and expanded in 2013 and successfully copes with the influx of tourists. Guglielmo Marconi Airport has all the amenities for a comfortable flight waiting: passengers can go for souvenirs to one of the local shops, including the duty-free shop, leave things in the storage room for a while, relax in the recreation area, order a glass of wine with pizza or pasta in the restaurant or have tea with tiramisu in a cafe. If you continue your journey by renting a car, the helpful staff will help you find your rental car pick-up counter, which is also surrounded by travel agencies.

Bologna can be reached by regular shuttle, which takes you to the central station in 20 minutes, where you can transfer to public transport. Tickets can be purchased from the driver for 6 euros, but it is worth remembering that this option can be used only until 23.30 and after 5.30. At night, you will have to look for alternatives, for example, a taxi, which will cost 15 euros on a weekday if you travel to the center of Bologna, and about 20 on a public holiday. If you want a profitable trip to Milan, especially when traveling with the whole family, book a car rental in advance to receive it upon arrival at the airport.

Bookingcar offers a range of car rental options at Bologna Airport. Guglielmo Marconi
With us you can choose a car of any class that best suits your needs.
Our prices are one of the best prices on the market.
See for yourself!
Professional support
Our professional call center will help you understand all the intricacies of car rental. We guarantee full support throughout the rental period.

Other locations in Bologna:

And why did not I take a car here before? Everything is super

We went for a drive on SMART FORFOUR. I recommend taking something higher class

My husband and I were satisfied with the car and how quickly the staff worked at all stages of the provision of services. Simply super!