Explore Hamburg in a hire car 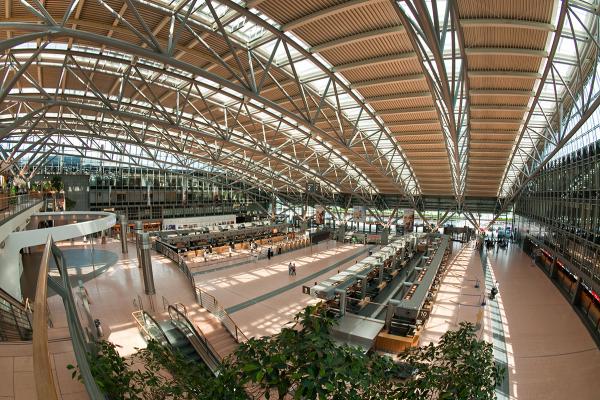 Hamburg International Airport is one of the oldest in the world and appeared in 1911 as a base for airships. During the Second World War, he began to use as an airfield by the British troops occupying this territory. Now through this air gate almost 13 million guests of the ancient German city, which has become the second largest in the country, arrive every year. Bookingcar offers to use the services of car rental leaders to see the famous 19th Century Town Hall, St. Peter's and St. Jacob's Church, Dambovaya Street on the canal with traditional house construction, the symbol of Hamburg is the house of Chile, which looks like the bow of a ship. A rental car will also allow you to go on an excursion to the nearby city of Bremen, famous for the tales of the Grimm brothers.

The terminal building consists of two terminals, spreading in two opposite directions, like two airplane wings. Between them is the spacious Airport Plaza with a wide selection of shops where tourists can buy German sausages and Hamburg white sausages on the road. In the lobby, you can relax before the flight and go to one of the restaurants where they offer to start your vacation with a tasting of local dishes. There is a travel agency on the ground floor where you can book a short tour if you are in Hamburg by car.

After modernization in 1990, the airport building is connected to the city by a railway, along which the express train runs regularly. Every 15 minutes, express buses depart from the airport, where you can get to the center in half an hour, paying 5 euros. Traveling by regular bus will cost less, but it will take more time. Those traveling with children and lots of luggage prefer a more comfortable way to get to the hotel - a taxi ride, which can be ordered for 40 euros at the exit of the arrivals area.

Bookingcar offers a range of car rental options at Hamburg Airport
With us you can choose a car of any class that best suits your needs.
Our prices are one of the best prices on the market.
See for yourself!
Professional support
Our professional call center will help you understand all the intricacies of car rental. We guarantee full support throughout the rental period.

Other locations in Hamburg:

Due to the difference in course, the amount may return less or more. Unpleasant surprise, but no one canceled the conversion
Megan Evans, 15 February 2020

It's great that you can make reservations from anywhere in the world, without being tied to the time of day

At the airport there was some kind of chaos. So many people that I even got lost. It's good that there was an airport map on Bookingcar.su. As for the car, everyone is happy. This distributor never fails. It's good that practically in all the cities in which I have to visit, I find suggestions from them. Always on time, always profitable and reliable. Very very satisfied.