Explore Pula in a hire car 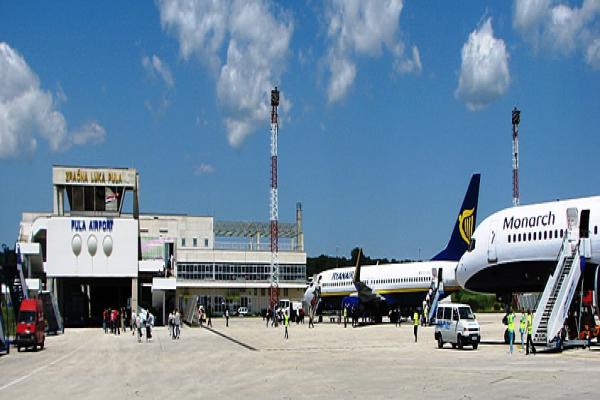 Pula International Airport is located 6 km from the port of the same name and the old resort, which is loved by many travelers from all over the world for its amazing nature, endless sea beaches and preserved historical monuments. Rent a car using Bookingcar to see the monumental ancient Roman amphitheater, created in the 1st century BC and occupying the 6th place in the world in scale, and its peer - the ancient Roman forum, the defensive fortress Castel, the Cathedral of the Assumption of the Virgin Mary IV century, and drive to the fascinating Plitvice Lakes, waterfalls flowing into each other among the emerald greenery of the national park.

The airport complex of the city of Pula, which is the largest on the Istrian peninsula, began its work before the Second World War. After military service in wartime in 1967, the air harbor switched to servicing civilian passenger flights. Now it is one of the best airports in resort areas, and more than half a million vacationers annually come here to relax from city noise, relax on the best beaches in Croatia and cure respiratory diseases in pine forests.

Still, there is no regular transport connection between the airport terminal and the city, so before arriving, you should take care of the way to get to the chosen hotel - for example, ordering a transfer at the hotel or booking a rental car.

The airport building has a comfortable waiting room with wireless Internet, as well as a lounge for VIP passengers. While waiting for the flight, tourists can dine in a cafe or restaurant, use the services of a bank, rental car desks, currency exchange, medical center and pharmacy, as well as buy the best olive oil, local wine, tinctures and cheeses in one of the shops.

Bookingcar offers a range of car rental options at Pula Airport
With us you can choose a car of any class that best suits your needs.
Our prices are one of the best prices on the market.
See for yourself!
Professional support
Our professional call center will help you understand all the intricacies of car rental. We guarantee full support throughout the rental period.

Other locations in Pula:

Conveniently and at the airport to pick up a rental car, and in the hotel. Everywhere service is fast and usually no questions arise.
Olga Chudnova , 29 July 2019

For my experience, I realized that Enterprise is one of the best distributors. I recommend!

It's time to expand the car park. Service is like, but the choice of cars is scanty, especially in the season. You plan to take one, and on the whole offer a completely different one.