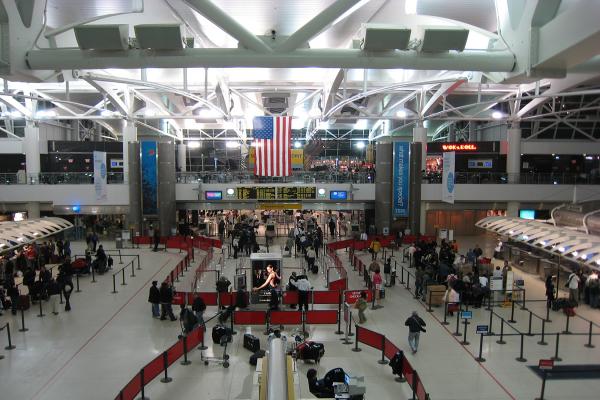 New York International Airport is the largest in the country and is located in the west of Long Island on the border of the colorful Brooklyn area. After a five-year construction of an air harbor on a former golf course in 1948, the first plane landed. Later it was expanded and modernized, and now it is able to receive even giant A380 aircraft and cope with passenger traffic reaching 55 million people. There are three parking zones at the airport, on one of which Bookingcar.su service users expect rental cars.

The airport, named in honor of the 35th President of the United States, John F. Kennedy, consists of 6 terminals, where tourists can relax after a long flight and not get bored while waiting for their flight. Each has a recreation area, duty free shops, the ability to use Wi-Fi for half an hour for free, and several cafes and restaurants. AirTrain, which rides without a driver, allows you to quickly move between terminals, which allows you to sit on the windshield, gaining access to the best views.

Almost every inhabitant of the planet imagines New York at least from the famous American films. Arriving in this metropolis, I want to see each of the famous sights: take a picture on the background of the Statue of Liberty and walk along its crown, climb the highest building in the city - the Empire State Building, and see two shores from the Brooklyn Bridge at once. By picking up a rented car at the airport, you can save on a taxi and easily see all the excursion routes in Brooklyn and Manhattan. And then go to Brighton Beach to relax and swim. A rented car will also allow you to make a longer independent trip - to the capital of Washington, the port of Boston and to the amazingly large Niagara Falls

Bookingcar offers a wide range of car rental options at John F. Kennedy New York Airport
With us you can choose a car of any class that best suits your needs.
Our prices are one of the best prices on the market.
See for yourself!
Professional support
Our professional call center will help you understand all the intricacies of car rental. We guarantee full support throughout the rental period.

Other locations in New York City:

We realized that if you call the support service, they can indicate the type of fuel and preferences for the car in the comments to the order. The main thing is to do everything in advance.

And the truth is quickly returned a pledge. One of the few distributors ...

Price tag is average, there are no complaints about quality. If somewhere you overpay, then in any case you remain satisfied with the service.

When booking the consultant's statement seemed too loud, well, it was not believed that everything would be smooth and beautiful. It turned out to be true. Generally the first time I encounter. The car was given with a small mileage and judging by the way it was traveling, or was really almost new, or regularly undergoing qualitative repairs. It turned out to be a great vacation and did not think about anything. Thank you, I want to address again and again.