€ 42.45
price for 3 days
Bookingcar offers a wide range of car rental options in Bucharest
Here you can find a car of any class that best suits your needs.
Our prices are one of the best prices on the market.
See for yourself!
Professional support
Our professional call center will help you understand all the intricacies of car rental. We guarantee full support throughout the rental period. 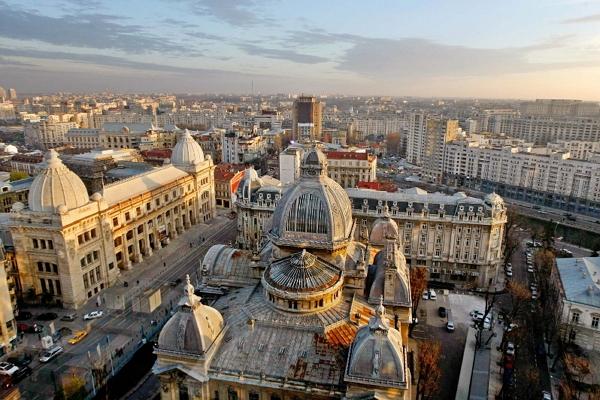 Artemy Lebedev once wrote that Bucharest reminds him of Paris, Kharkov and Petersburg at the same time: city signs and neoclassical architecture of the city center seem to be taken from the first, buildings the size of a quarter evoke associations with the second, and sleeping areas with the third city. But Bucharest has its own story and color: if you visit the Old Town with a labyrinth of narrow streets, you will be convinced of this right away. The capital of Romania is located in a surprisingly picturesque place among lakes, gardens and parks, therefore we advise you to rent a car so as not to miss anything and everywhere to be in time. 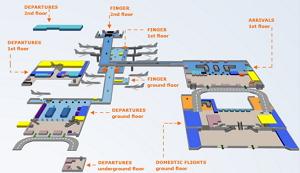 What to see in Bucharest: interesting sights of the city 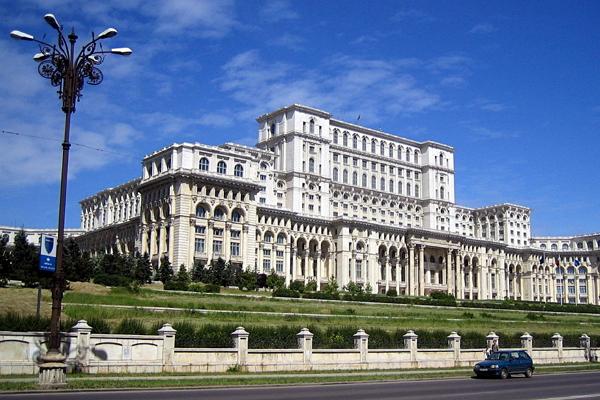 The Palace of Parliament twice entered the Guinness Book of Records as the world's largest civilian structure. Because of 1,100 rooms, the palace, for the construction and decoration of which was spent more than 3,500 tons of crystal, about 1 million cubic meters of marble, 900 thousand cubic meters of wood and 200 thousand meters of carpets, became not only the pride and heritage of the capital, but also a controversial symbol of dictatorship and tyranny to Nicolae Ceausescu-General Secretary of the Romanian Communist Party.

National Museum of Art of Romania 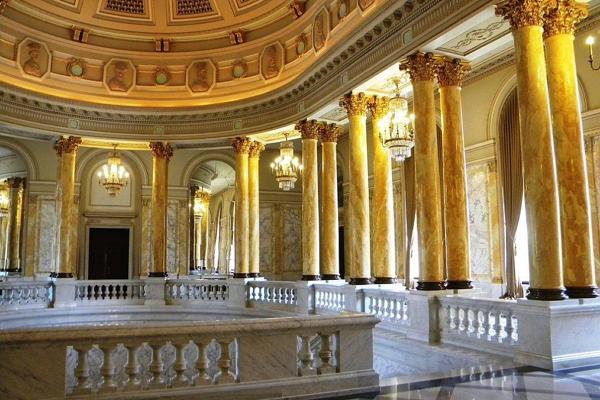 A neoclassical building in the center of Bucharest, which now houses the National Museum of Art, was once the royal palace’s main palace. After her abdication, magnificent halls were given over to the exhibition of more than 4,000 paintings by Romanian, Italian, German and Spanish painters. The personal collection of Carol I, the first king of Romania, included paintings by El Greco, Rembrandt, Peter Brueghel the Elder, Rubens, Titian, Velazquez and Tintoretto - they formed the basis of the “European” part of the exposition. But the National Museum of Art is not only a chance to see the rare works of world famous painters, but also get acquainted with Romanian art. Have you heard of Nicolae Grigorescu, the Impressionists Jon Andreescu and Stefan Lucian, the Surrealist Victor Brauner? We think not, so it's time to get acquainted with their work.

National Museum of the History of Romania 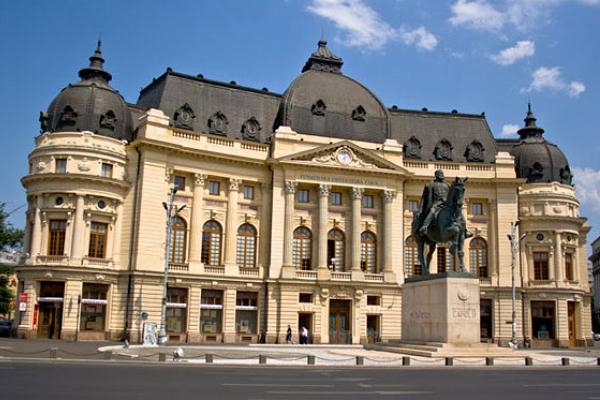 The first museum of history and archeology of Romania, which opened in 1970. On the main staircase there is a sculpture of the Roman emperor Trajan with a mysterious creature in his hands. This statue symbolizes the kinship of the Dacian tribes with the ancient Romans, personifies the proximity of the Romanian and Italian cultures. The exhibition halls of the museum, where archaeological finds are presented proving that people have lived in Romania since the Paleolithic, make Romanian culture penetrate and feel its scale. The rest of the exposition will tell about the history of the country, from ancient times to modern times. 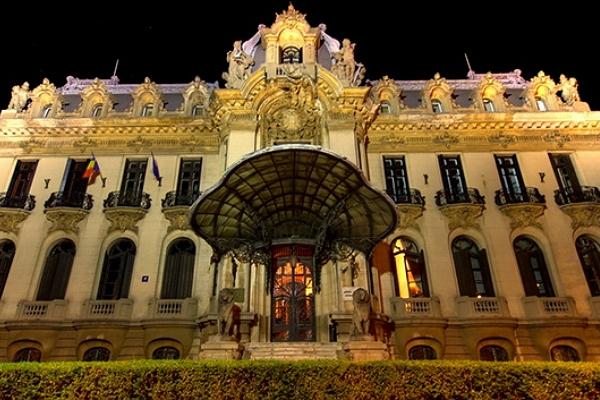 Cantacuzino Palace, located in the center of a magnificent park, is one of the most beautiful buildings in central Bucharest. It was built in 1903 according to the project of architect Johan Berindeim at the junction of several styles: experts will find French academism, and Baroque, and Art Nouveau. Look inside the palace and you will find yourself in the museum of one of the greatest musicians of Romania, George Enescu. He lived here with his wife Maria, and it was she who bequeathed to turn the palace into a museum. The music here, by the way, sounds even now: concerts are often given in the concert hall, some of which take place outdoors in the garden. 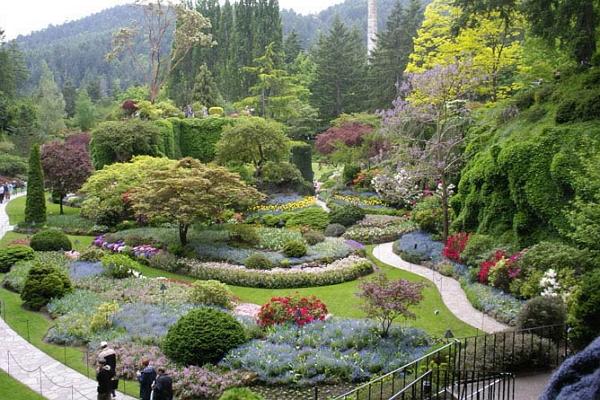 You can relax from the bustle of the city on the picturesque hill of Kotrochen, where the picturesque Botanical Garden is located. This place, founded in the second half of the 19th century and occupying only 7 hectares in those years, has become a real masterpiece of landscape gardening art, where more than 10 thousand plant varieties are collected. Locals adore this park for its cosiness, silence and wonderful natural views.

In the vicinity of Bucharest: the best car routes 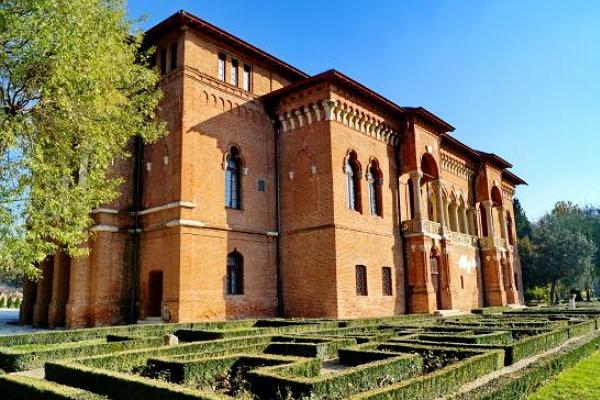 On the very outskirts of Bucharest is the Mogoshoaia suburban palace, built at the beginning of the 18th century in the Brynkov style. Konstantin Brynkovyan, whose name is now called the explosive mixture of Ottoman and Venetian architecture, insisted on such a stylistic decision. In the twentieth century, under the leadership of the aristocratic family of Bibesco, the palace was strongly rebuilt, but the old part still remained. And today, the Mogoshoya Palace is not only one of the attractions in the vicinity of Bucharest, but also a film set for films and videos. The palace can be quickly reached by rental car from the city center. 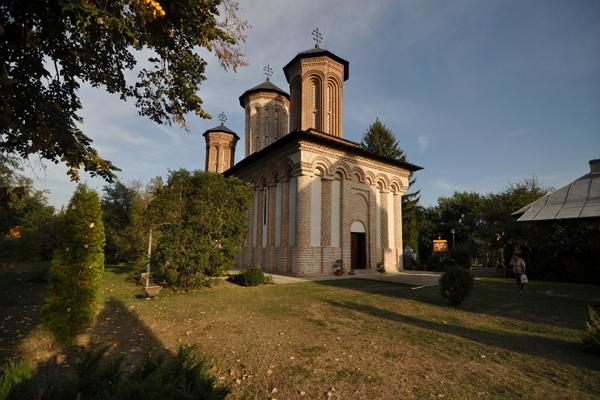 Having rented a car, go to Lake Snagov - one of the favorite places among Bucharest residents. They are attracted here by the beautiful scenery and the purity of the lake, where you can swim and fish, and tourists are attracted by the legend of Dracula. Locals say that in the monastery on the shore of one of the Snag's islands lies the head of the Turks, the head of Vlad Tepes. 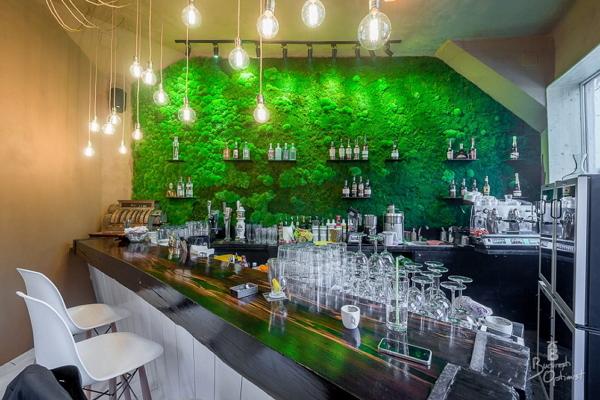 A charming gastropub in the heart of the city has long been loved by the locals. Despite the eco-design (a terrace with a beautiful garden and a spacious hall where the whole wall is decorated with emerald moss), the institution does not position itself as a vegetarian. However, the vegetable dishes in Shift are still excellent: try cream soup with broccoli and risotto (a classic and familiar to everyone recipe, but the execution is simply gorgeous). Against the background, something from folk music sounds along with dubstep and funk - a bold and fresh combination that you do not often find. 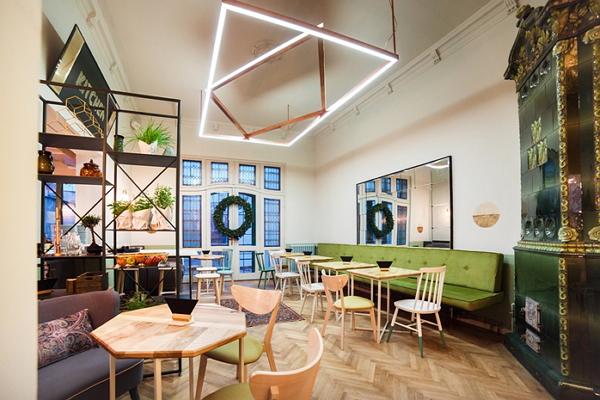 Restaurant Simbio is familiar to most citizens. Everything that is loved in this city is presented here: a small garden where you can have breakfast with perfectly cooked Benedict eggs or banana pancakes and read a book in the shade of fruit trees; A bright room with a laconic interior and bright details, where it is nice to eat a hamburger that made this place famous. Among the visitors are mainly young people who run here for lunch or to meet friends after work. A cozy establishment with delicious food and a creative atmosphere. 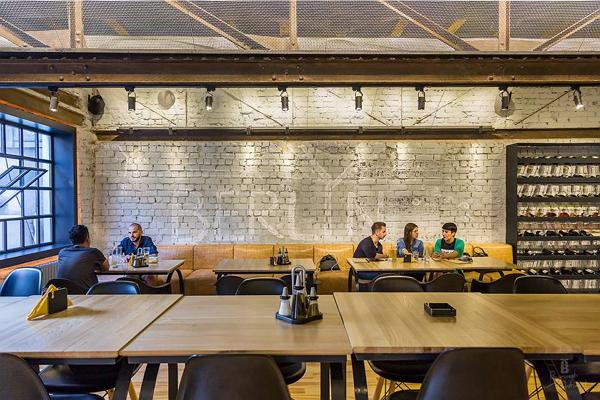 On the street of Constantine Millet is the most famous club in Bucharest Control- a place where the best parties in the city are held and artists, designers, journalists and musicians gather. Directly above it is the no less famous Alt Shift restaurant, a place with a 30-year history. Founded under Ceausescu and then called Berlin, it really resembles one of the restaurants in the German capital. In Alt Shift, minimalism once and for all won: white walls, wooden beams on the ceiling, simple furniture and huge panoramic windows. But what really impresses with Alt Shift is the food. Be sure to try beef schnitzel with rice and porcini mushrooms and cheese soup. 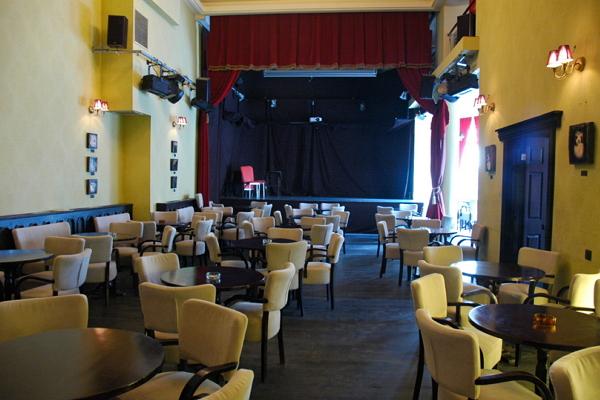 It was this institution with a name inspired by the play of Samuel Becket that showed Bucharest what a non-conformist theater is. The space of the restaurant is competently divided into several zones: they drink in one place, eat in another, and watch plays in the third. The evening Godot program is very extensive, here you can not only appreciate the play of young actors, but also listen to the performances of comedians or musicians, watch a movie or get to the presentation of the book. And during the day you can always just eat lasagna or salmon fillet in orange sauce and hear live music. 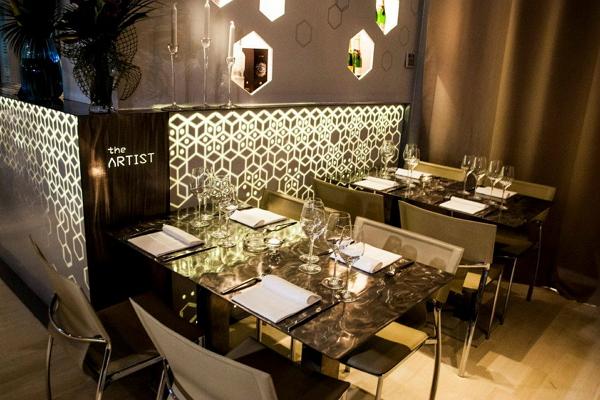 The Dutchman Paul Oppenkamp, ​​the chef of The Artist, first fell in love with Romanian, and then - with Romania. A culinary specialist with 20 years of experience could not help but appreciate the local cuisine and the environmentally friendly vegetables and fruits grown by his wife’s grandmother, so he decided to open the first molecular cuisine restaurant in Bucharest. And he did it very well. If you are no longer surprised by the local flavor, but want to be surprised at something, then come to The Artist to try modern and slightly strange dishes with interesting and memorable flavor combinations.

Where to live: comfortable Bucharest hotels 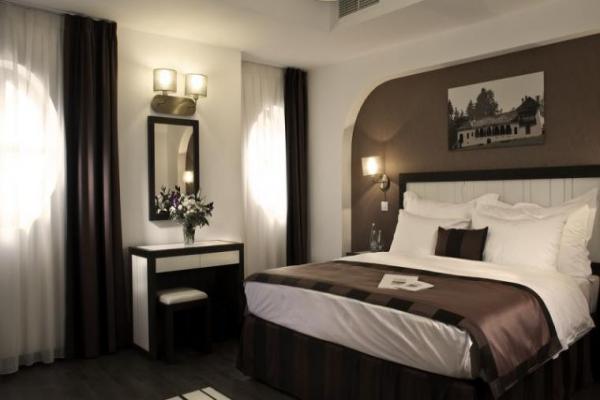 A charming boutique hotel, which is said that the photo on the site is much worse than reality. The interiors, inspired by the Romanian architecture of the beginning of the 20th century, are designed to set you up for long walks in the city, and the relaxing atmosphere and friendly staff can give you a rest even during a business trip. The hotel has free parking where you can park your rental car. 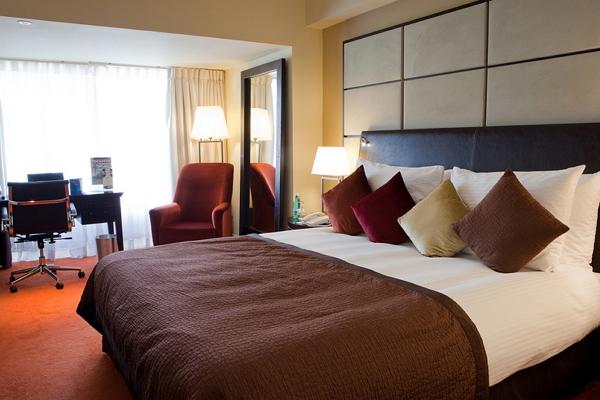 Hotels belonging to five-star chains with big names are a win-win choice. Spacious, stylish and perfectly furnished rooms, delicious breakfasts, smoothly working Wi-Fi, an excellent spa and outdoor pool, which, by the way, are a rarity for Bucharest. If you want a thrill and gambling sensations, then a casino is at your service. There is also a place for your rented car: Radisson has its own paid parking. Hotel guests only complain that they do not want to leave here at all. 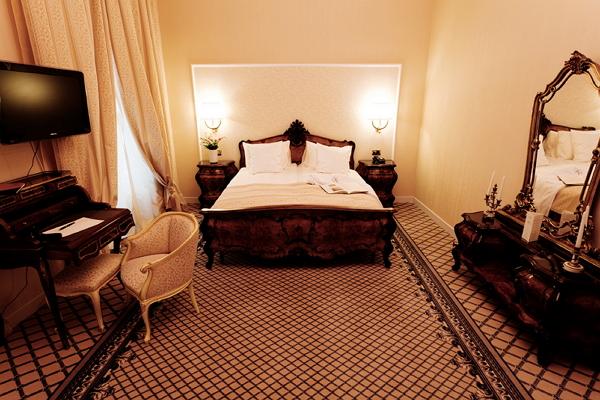 A five-star and very Parisian boutique hotel in a historic building in the center of Bucharest. Continental reopened its doors to guests in 2009 after a long restoration. The rooms decorated in the Rococo style would have liked Marie Antoinette, who would have spent more than one hour here, lying on a beautiful sofa and enjoying various cakes and rolls from the local TeKaffe. Guests can also use the Eden Spa, which features a sauna, a gym and a spacious hot tub. If you decide to rent a car, then inform the reception: for a fee, you will be provided with a parking space. 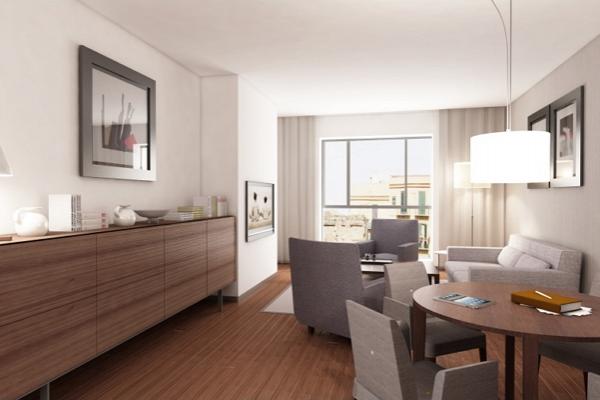 Hotel near the historic city center. Spacious rooms with a minimalistic design, which is built on different textures of wood, a beautiful roof terrace where you can have breakfast in a romantic setting, and a restaurant serving national cuisine. For those traveling on a rented car, underground parking is available (prior reservation is needed). 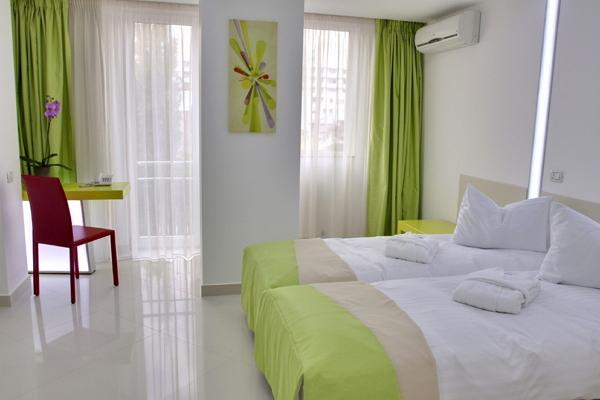 A charming hotel whose design does not fit into the prevailing trends of recent years. You won't see hi-tech or classic décor here - only bright colors in the style of the hotel logo, white walls and simple furniture. Against the background of most hotels, Christina looks fresh and modern, which is greatly facilitated by the reputation of an eco-hotel. Free parking is nearby, so you will have a place to leave your rental car.

Where to park a rented car in Bucharest

In case of any problems related to car rental in Bucharest, BookingCar will solve them as quickly as possible.