€ 499.42
€ 324.62
price for 3 days
Save on this offer 35%
Bookingcar offers a wide range of car rental options in Bologna
Here you can find a car of any class that best suits your needs.
Our prices are one of the best prices on the market.
See for yourself!
Professional support
Our professional call center will help you understand all the intricacies of car rental. We guarantee full support throughout the rental period. 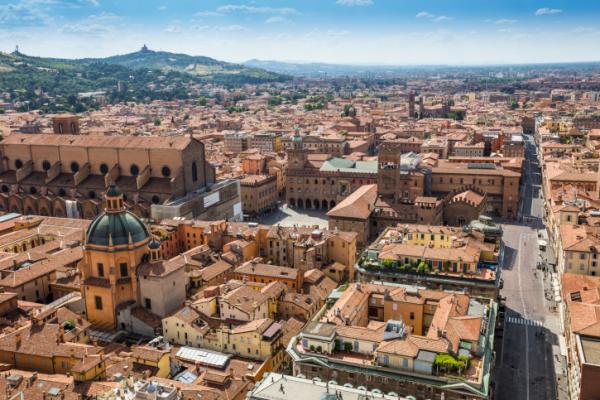 Bologna is called the city of towers and gates. For several centuries, tower fashion remained in the city, so every noble family considered it their duty to acquire a registered building. If you rent a car, be sure to visit the local cathedrals, churches, pinakothek and museums. Savor local specialties and, of course, wine. After, head to the famous Quadrilatero market, where you can buy unique vintage gizmos. Walking along the streets of Bologna, start a conversation with local residents and ask them to show interesting sights that are hidden from tourists.

What to see in Bologna: interesting sights of the city 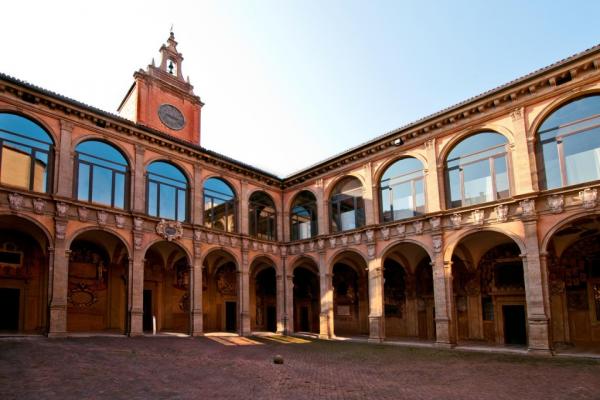 The building of the gymnasium is located in the very center of the city, so walking in the quarters of Bologna, it will be impossible not to notice. Once it was the University of Bologna - one of the most popular in Italy. Noble families of young people sought to study here. By the way, Copernicus, Petrarch, and Dante were educated at the archimnasium. The construction is two-level: on the first level there is a lower portico and a courtyard, on the second - premises where classes were held. Particularly noteworthy are the walls of the courtyard, on which a collection of emblems is represented. The collection contains more than 7 thousand copies. Hire a car and go to inspect the once famous university in Italy. 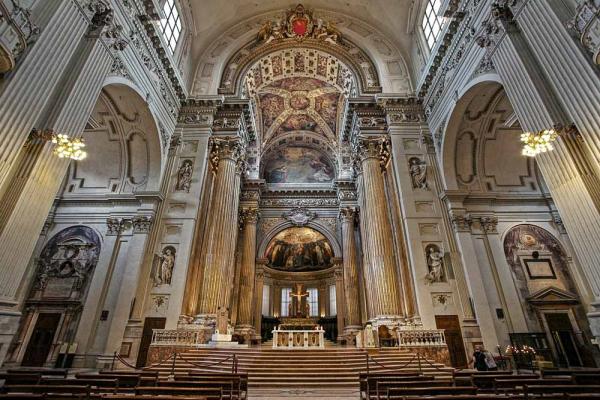 The construction of the Cathedral of San Pietro lasted more than a century, and the decoration took several more centuries. This is not surprising, because the basilica is considered the sixth largest in the world. She has no equal. The cathedral is made in the Baroque style. Interior decoration - ancient sculptures and a cycle of valuable frescoes. The interior is fascinating from the first seconds. In every square centimeter he feels the grandeur and sacredness of this place. It is interesting that for several centuries solemn events, court hearings, and public meetings were held here. And only at the beginning of the 20th century the basilica officially became the property of the diocese. 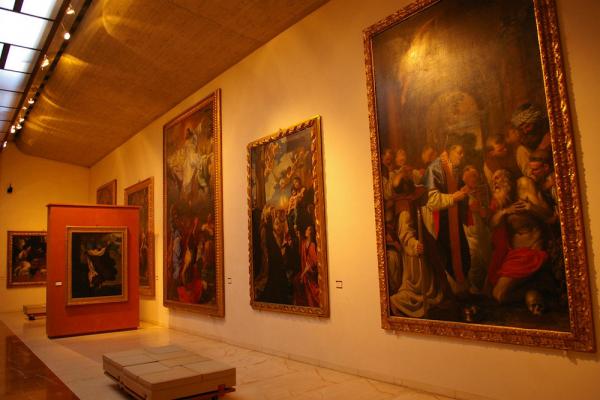 The Pinacoteca in Bologna is a unique art museum that is considered one of the best in Italy. The numerous rooms feature works by artists dating back to the 13th century. Here you can see the paintings of Raphael, Perugino, Reni, Karachi, Guercino and many others. When you rent a car, go to the national pinakothek for cultural enrichment. 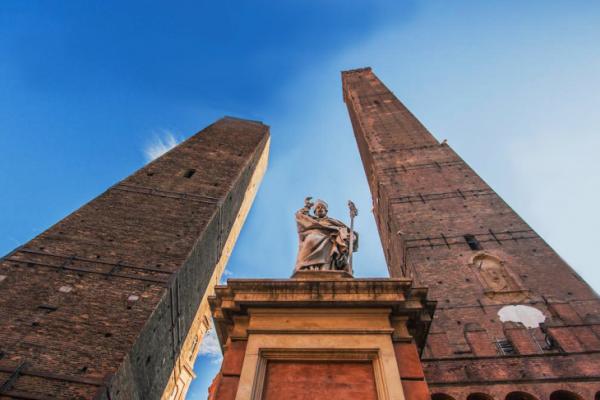 Leaning towers are a symbol of Bologna, although they are not as popular as the Leaning Tower of Pisa. The higher tower is called Azinelli, and the lower one is Garisenda. Historians claim that the Azinelli tower originally belonged to a noble family, and after that it became the property of the municipality. Today you can see Garisenda only from the street, but you can climb Azinelli, and you will have to overcome about 500 steps. 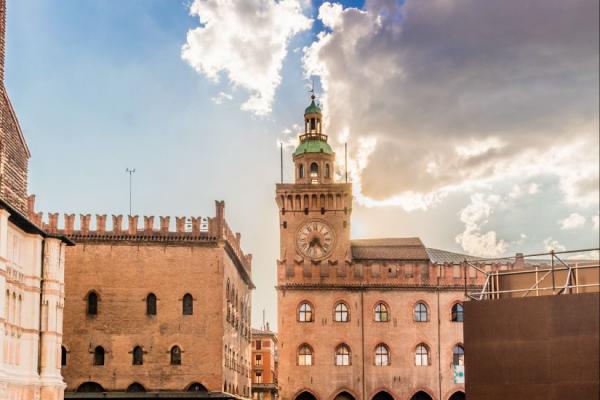 In order to continue exploring the main attractions, drive a rental car in the direction of Piazza Maggore. Your attention will be drawn to a building resembling a town hall. Today, there is a museum in which you can view collections of works of art, starting from the Middle Ages and ending with exhibits of the 19th century. The building is not only magnificent from the inside, but also from the outside. Remember to take some memorable shots, especially if you take a stroll here at sunset.

In the vicinity of Bologna: best car routes 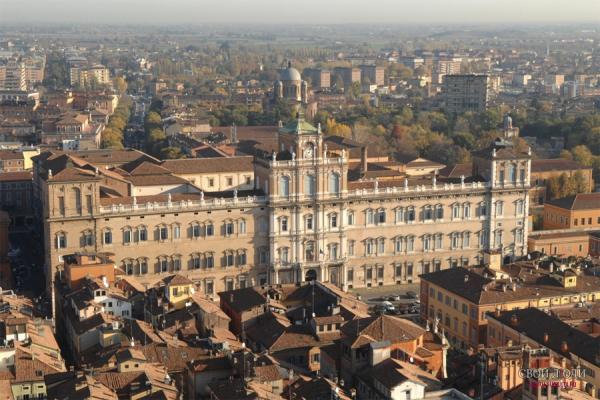 Having got acquainted with Bologna, go on a short trip to the north-west to the city of Modena - the homeland of tortellini, Parmesan cheese, balsamic vinegar and Lambrusco. Despite the small size of the city, there are 25 libraries, 16 cinemas, the oldest university in Europe. Walking around the Modena neighborhoods, inspect the Cathedral, the south gate, Piazza Grande and the bell tower of Garlandina, as well as the massive stone of Preda Ringador. After that, be sure to go to one of the restaurants and sample dishes from local cuisine. 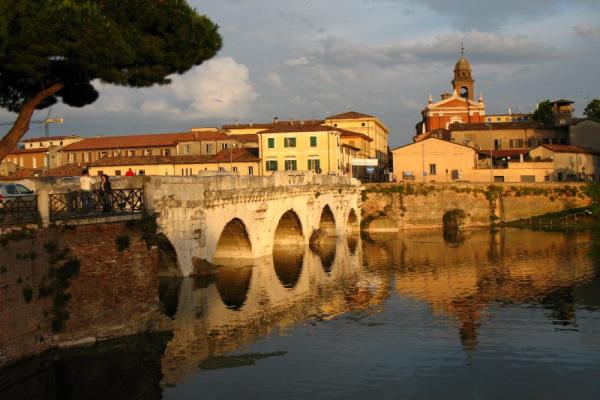 Ravenna is a city that is less popular among tourists, although the number of beautiful places and objects of cultural heritage is not inferior to such large cities as Venice, Florence, Milan. Few people know that at the beginning of the 5th century the city was the capital of the Western Roman Empire. Upon reaching Ravenna in a rented car, it is better to leave it in the nearest parking lot to enjoy hiking in the Old Town. Of particular interest to travelers is the Basilica of San Vitale, in which you can see the early Christian and Byzantine mosaics. Nearby is the grave of Dante. In addition to historical sites, Ravenna is famous for its clean and comfortable beaches. The most modern resort is Lido Adriano, where, mainly, young people relax. And Punta Marina Terme is an ideal place for families. 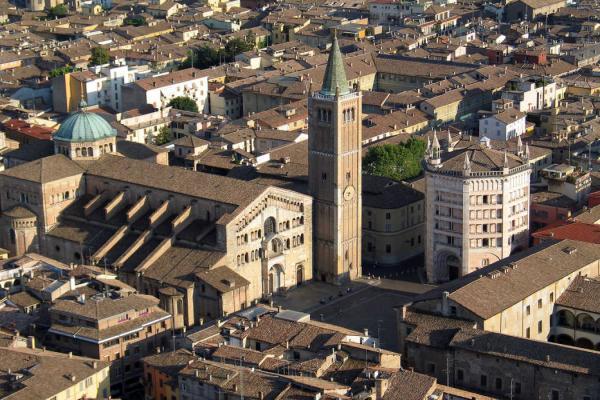 For cultural enrichment and delicious food, head to the provincial town of Parma. He became famous throughout Italy for the production of cheese and ham, and Parma dishes deserve special attention from lovers of gastronomic delicacies. After a hearty snack, go listen to Othello or Traviata at the Giuseppe Verdi Theater. By the way, every fall in Parma a festival is held in honor of the great composer. 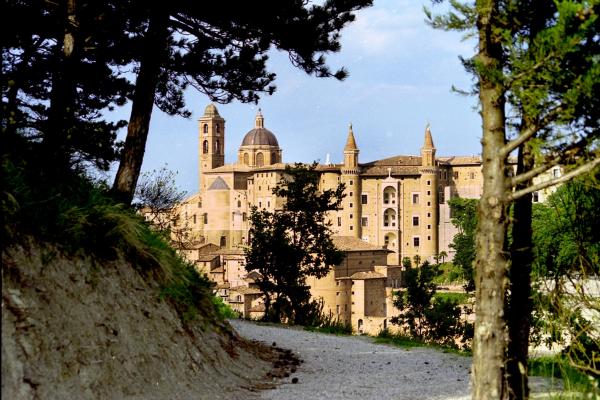 Having rented a car, go to the charming town of Urbino. It is best to start exploring the city with a walk through Borgo Mercatale Square. Here you can purchase a map of the city and fully plan the route of movement. Mandatory places to visit are the ancient gates of Porta Valbona, Piazza San Francesco on Via Raffaello, on which is located Rafael's house, the earthen rampart of Parco della Resistenza. Be sure to visit the main cathedral of the city, which houses paintings by Piero della Francesca, Federego Barochchio and some other artists. 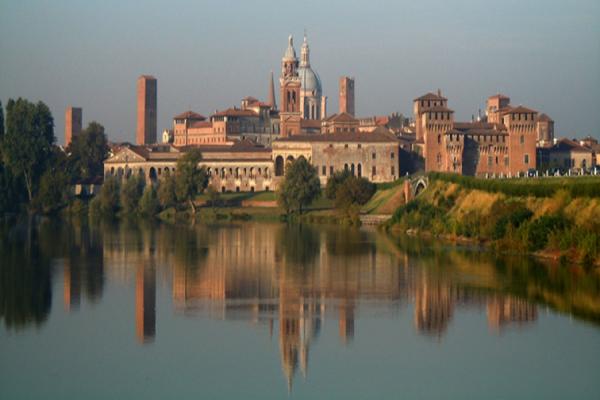 Mantova is a picturesque town, which is considered the birthplace of Virgil. The city is surrounded by numerous lakes and streams. This adds a special charm and beauty. Significant sights include the Mantua Cathedral, which was destroyed by fire and rebuilt, the Basilica of Saint Andrea, which was repeatedly rebuilt. It is also worth visiting the ducal palace, which consists of more than 500 rooms. Once it was the residence of the rulers of Mantua, and today it attracts the most prominent art historians and tourists from around the world.

Via Luigi Serra, 9 / b http://www.trattoriadiviaserra.it/ 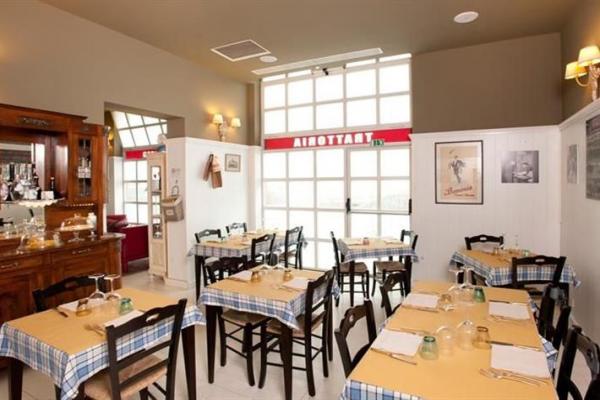 When you rent a car, stop for lunch at the Italian restaurant Trattoria di via Serra. This is one of the sweetest and most cozy places in Bologna. Be sure to try pasta and wine. If you can’t decide on the dessert, the owner will find a way out: they will offer you a mix of desserts that you liked. In addition to delicious food - reasonable prices. By the way, on Mondays and Tuesdays, the institution does not work, and on other days it will be possible to stay here until late in the evening. 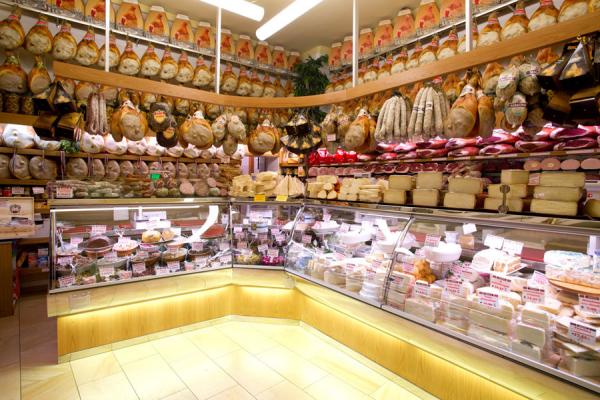 The menu offers Italian and gluten-free dishes. Salumeria Simoni is famous for delicious lasagna and snacks. By the way, there is a Bologna deli shop inside. You can not only taste cheeses, meat, sausages, ham, but also buy a gift in beautiful packages. The place is especially popular among locals. The institution is marked with a certificate of quality, so there is no doubt in good service and delicious dishes. 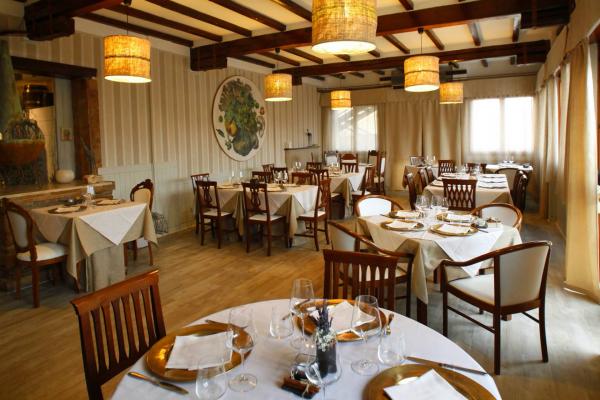 Antica Trattoria Del Reno is a luxurious restaurant in Bologna, which is famous for author's dishes of the chef and an unusual approach to their presentation. Particular attention is paid to the design of dishes, so that each of them can be safely called a work of art. The highlight of the restaurant is fusion cuisine. Here you can also try dishes from Italian, Mediterranean, vegetarian cuisine. Leave your rental car in the parking lot and try the gastronomic delicacies at Antica Trattoria Del Reno Restaurant. 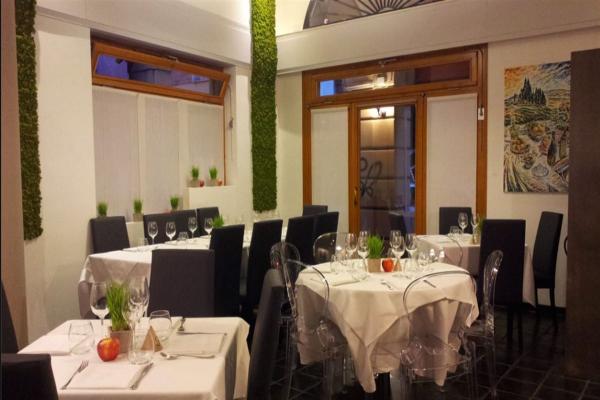 To enjoy delicious Bologna food and the cozy atmosphere of the L´Arcimboldo restaurant, it is better to book a table in advance. Here you should try beef tartare with burrata, broth tortellini, ravioli with parmesan and gnocchi. By the way, the restaurant has a gluten-free menu. You can sit inside the institution or at a table in the open air. The establishment is ideal for a family or romantic dinner.

Osteria Satyricon is a cozy restaurant with excellent service. The menu offers a wide selection of soups, seafood dishes. This is one of the few places where octopus is properly cooked and served. Locals come here for delicious pasta and desserts. A nice bonus is an acceptable pricing policy. By the way, a rental car can be parked near the restaurant.

Where to live: comfortable hotels in Bologna 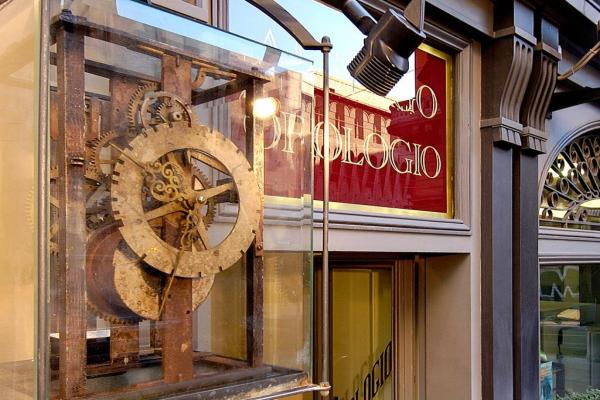 The hotel is located in the city center in an old building, which adds special charm and comfort. The name of the hotel in translation means “hours”, which are the highlight of the interior. Here you will be offered a delicious breakfast for every taste. It is worth noting the convenient location of the Art Hotel Orologio. The main square of the city is just a few minutes walk. Nearby are also the main cultural sites, market, shopping center. 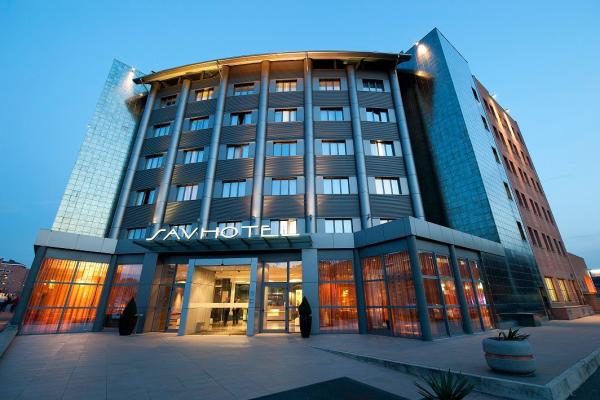 The main advantage of Savhotel is its own covered garage, where you can leave a rented car. The interior is modern and stylish. The rooms are spacious, newly renovated. The hotel cares about the environment, as evidenced by the title of “eco-leader”. In the morning you can visit the fitness center, and then go on a sightseeing trip. 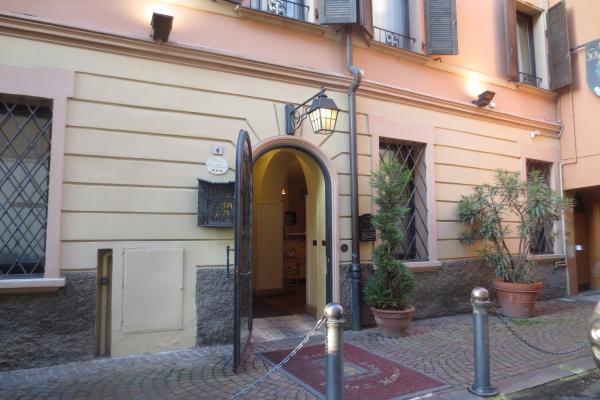 Hotel Porta San Mamolo is one of those who want to return again and again. The owner of the hotel is a friendly man who personally takes care that his visitors do not need anything. It is homely here, and the spacious rooms have everything you need for a comfortable stay. In the morning you can enjoy a rich breakfast (served free of charge), and in the evening you can sit in the garden with a glass of wine and Bologna snacks. To get a pleasant atmosphere, it would be better to stay here for a few days. 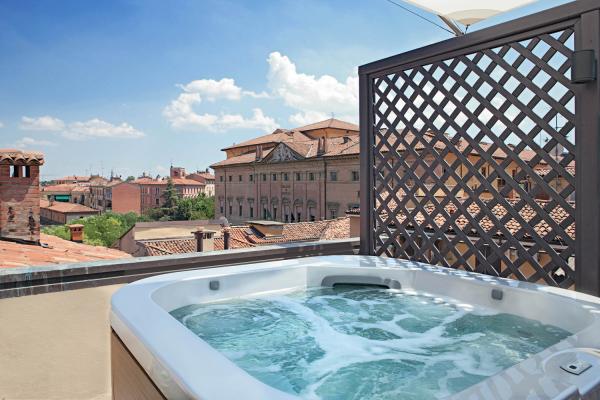 The hotel is in a picturesque location in the city center. In walking distance - Piazza Maggiore, the towers of Bologna, the Mambo Museum, the palace of King Enzo. The rooms are small, but going out to the balcony, you will see a beautiful panorama of the city. On the cozy terrace you can have a delicious breakfast and enjoy the morning city with a cup of coffee, and in the evening - discuss the impressions received during the day with a glass of Bologna wine. There are many restaurants nearby where you can enjoy dishes for every taste. A rental car can be parked near the hotel. 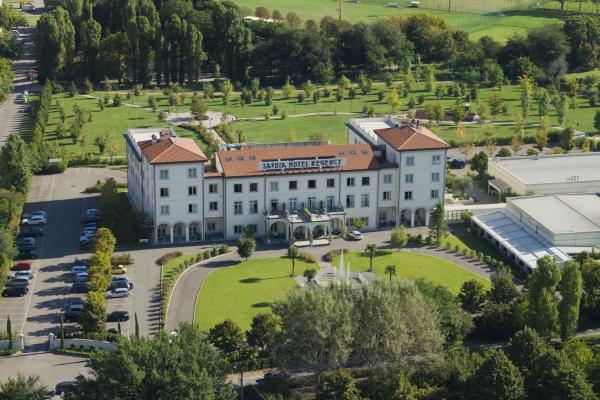 Savoia Hotel Regency is located in a suburb of Bologna, therefore hidden from the hustle and bustle. It is surrounded by forest and green spaces, fountains, flowers, which gives it a special romanticism. Tourists are offered a spacious pool, a fitness center, a garden and a sun terrace. The hotel has a themed restaurant serving national dishes and live music. The airport is a 10-minute drive away and the city center is just 20 minutes away.

Where to park a rented car in Bologna

In case of any problems associated with car rental in Bologna, BookingCar will solve them as quickly as possible.